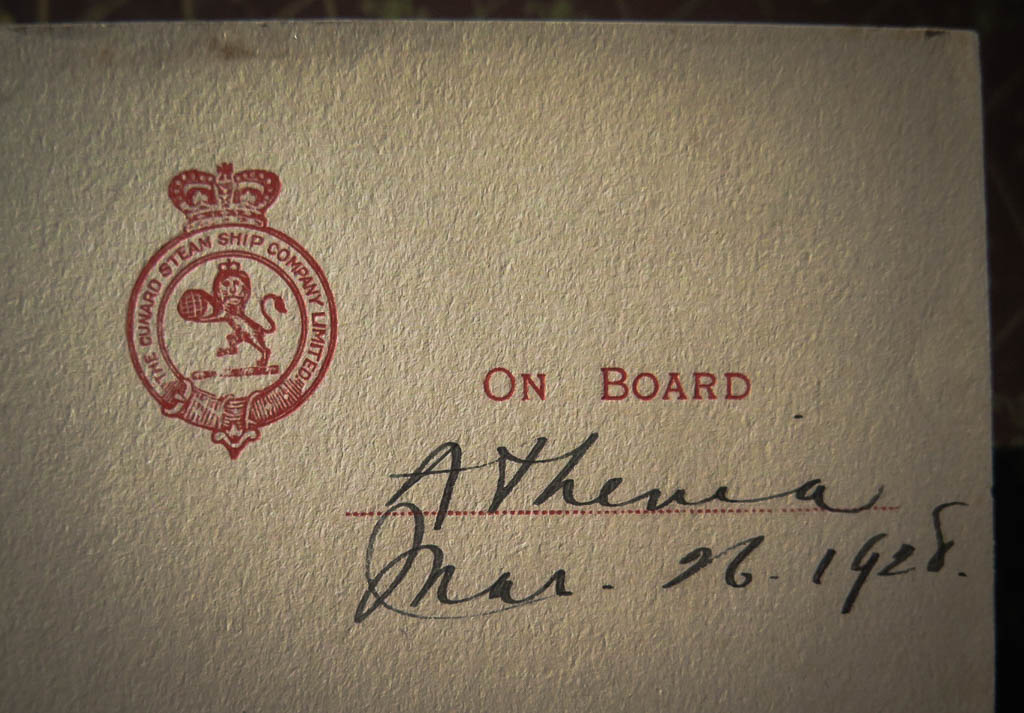 Posted at Sea – Tragedy Aboard the S. S. Athenia

Eternal Father, strong to save,
Whose arm hath bound the restless wave,
Who bidd’st the mighty ocean deep
Its own appointed limits keep;
Oh, hear us when we cry to Thee,
For those in peril on the sea!

Trapped beneath a clear magnetic page in the Marcom Family album was a letter addressed to Miss Nora Hughes, postmarked March 27th, 1928.  The letter was posted at sea from the S. S. Athenia, a ship with an incredible history. 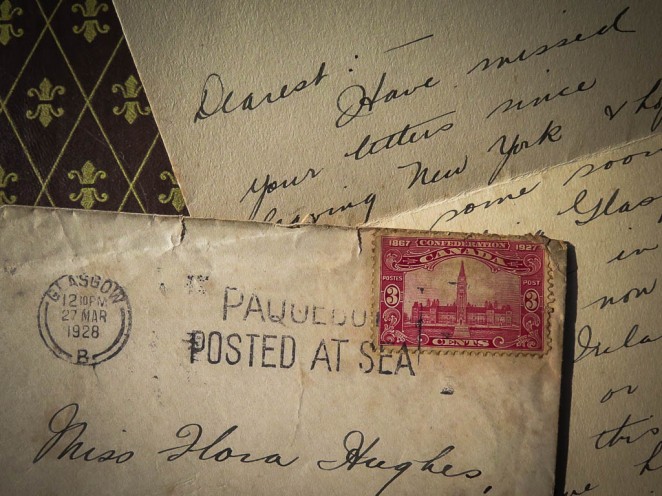 The envelope is impressed with a “Paquebot – Posted at sea” stamp. The laws concerning letter mailed at sea were written in 1891, by the Universal Postal Union.  Rick Miller of Linns Stamp News explains the origin of the Pacqubot stamp.

“Covers and cards mailed at sea are generally referred to as “paquebot” covers. “Paquebot” is French for “packet boat,” and postal administrations use paquebot handstamps to mark mail received from a seagoing vessel that has no on-board post office.  Originally packet boats were small vessels employed by a government to carry dispatches, mail, passengers and cargo on relatively short voyages on fixed sailing days. Over time, however, paquebot mail came to mean any mail received at sea.”

The stamp on our letter is Canadian, which means the S. S. Athenia was flying under the Canadian flag at the time the letter was handed to the purser on board. While the letter is dated March 26th, 1928, the postmark on the envelope is dates March 27th from Glasgow, Scotland. 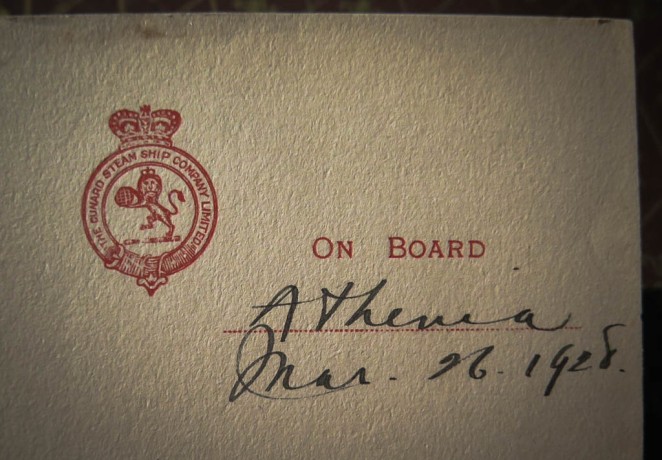 Once the ship docked in Glasgow, all mail received during S.S. Athenia’s voyage was delivered to the post office serving the Glasgow port. The “Paquebot” stamp is impressed and then the letter was entered into the mailstream.

What was life like onboard a transatlantic Streamliner in 1928? 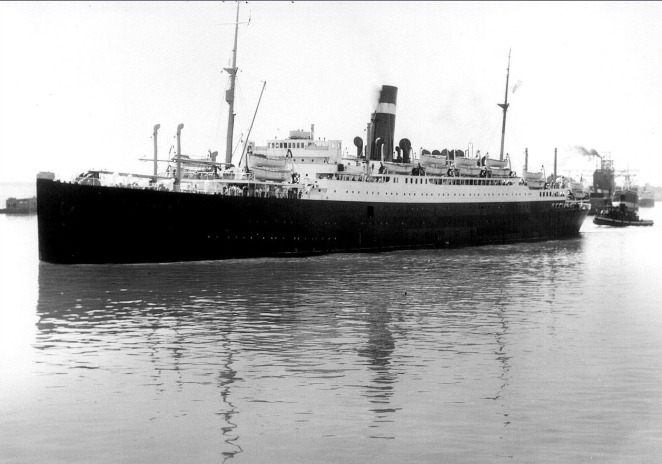 The S. S. Athenia and her sister ship the S. S. Letitia were the largest of the Anchor-Donaldson line when they launched in 1924.

Thanks to James Cameron, we’re all familiar with the luxury interiors of the grand streamliners of the early 20th Century.  Deep below the ballrooms and bars of the first class desks, the third class accommodations were meagre and cramped, mainly serving the waves of immigrants who scraped and saved up to cross the Atlantic as a matter of necessity, not leisure.

As immigration laws were stripped down and the waves of immigrants crossing to the US was crippled in the 1920’s, steamliners took a huge cut in profit.  In an attempt to gain some ground, the streamliners converted converted their steerage spaces into low-cost cabins marketed to business travelers and middle class tourists.

Libraries, smoking rooms and traditional games on the lower deck all kept the tourist passengers occupied for the week-long journey.  While the cabins were still on the small side, they were outfitted with washbasins, linens, rugs and other luxuries of the home. 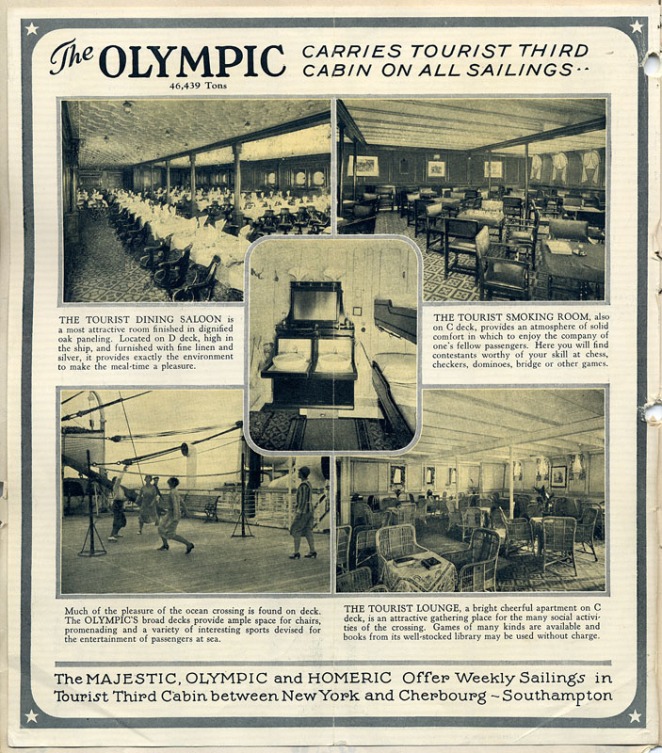 I have taken one sea voyage on a cruise ship; a one night trip across the Baltic Sea from Stockholm, Sweden to Tallin, Estonia.  While I was distracted by the bizarre pub-quiz, enjoyed watching the elderly boozehounds stocking up on handcarts full of liquor at the duty free shop and fortified by a Toblerone as long as my arm, I couldn’t erase from my memory that only a few years prior a ship operated by the same company, sailing the same route, sank in the night and took 862 souls down with her.

The story of this failed journey is horrifying and fascinating. The circumstances and subsequent handling have been shrouded in controversy. The boat took on water during a serious but not unusually severe storm. A series of misfires from the crew led to the situation not being understood and handled with the attentiveness that it deserved. The crew under-reacted to quickly worsening conditions, and as a result, most of the passengers drowned in their cabins as the boat quickly sank in the night.

The MS Estonia and those who died aboard remain today at the bottom of the Baltic Sea. The cost to salvage the ship and the bodies was deemed too expensive, and a decision was made to bury these folks at sea. And there they remain, along the path we traveled in the night.

I waited until we were safely on dry land to share this story with my Gentleman Caller, what’s the point of two people staring at the ceiling all night? 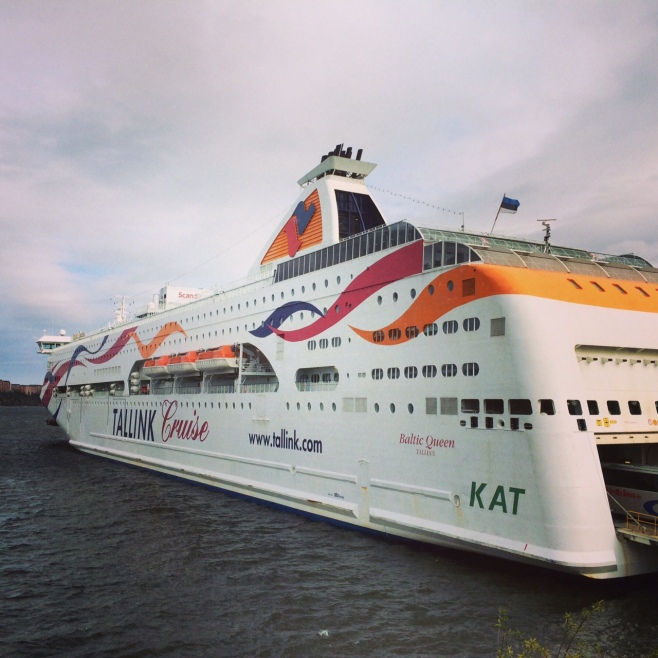 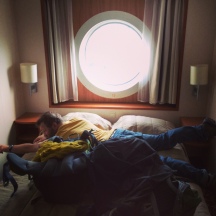 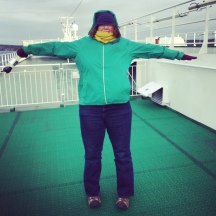 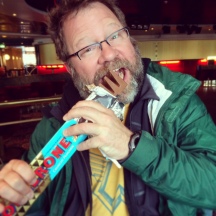 Back to the letter to Miss Nora Hughes.  The full text of the letter is as follows:

Have missed your letters since leaving New York and I hope to have some soon after reaching Glasgow.

We are in sight of land now and will be in Ireland about three or four and I’ll post this there.

Have had such a glorious time and I have laughed every minute.  Have met some very interesting people and have not missed a meal.  I haven’t felt sea sick a minute and so well.  O love the ocean and am sorry we cannot be on board another week.  The days are flying.

We had a wee boy die on the way over and he was buried at sea.  That has been the only incident to mar a most delightful trip.

Dad and mother join me in love to you.  Mother said “tell her I love her lots.” I do too hon and miss you so much.

I will write you soon again and my love to your mother.

Through the powers of Ancestry UK and my nimble-fingered mother, I was able to locate the passenger list for the 1928 voyage of the S. S. Athenia.  There were six other American passengers on board.

As Kathryn mentioned in her letter, a young boy died during the voyage.  Samuel Damm died on the 22nd of March at age 4.  He was crossed off of the passenger list, his death noted in red ink.

A note, written in seconds, representing a lifetime of grief.

One more melancholy story before you go.

The ship that brought Kathryn Alexander to Glasgow from New York was not the first S. S. Athenia of the Anchor-Donaldson line.  A smaller passenger ship sailed for the line in the beginning of the 20th century.  On Aug. 16, 1917, the Anchor- Donaldson Line’s original passenger ship Athenia was torpedoed and sunk by SMS U-53, one of the six Type U 51 U-boats of the Imperial German Navy during the First World War.  17 souls were lost.

Twenty-two years later, the second S. S. Athenia left Glasgow, on the same route to New York that Nora took, albeit in reverse.  Two days prior, Chamberlain had declared war on Germany.

271 miles away from the sunken wreck of her sister ship, the U-30, a German U-boat under the command of Oberleutnant zur See Fritz-Julius Lemp, waited for her.

Lemp tracked the ship’s progress, testifying later that he observed a darkened ship, traveling in a zip zag pattern, off course of any known shipping lines.  He believed it to be a troop ship.  After tracking the Athenia for three hours, without a warning shot, Lemp ordered two torpedoes to be fired at her port side.  Only one of the torpedoes exploded, hitting the Athenia on the left of the engine room.  The boiler exploded and she began to sink.

119 souls perished over the 14 hours it took her to sink beneath the Atlantic.

She was the first ship torpedoed in World War II. 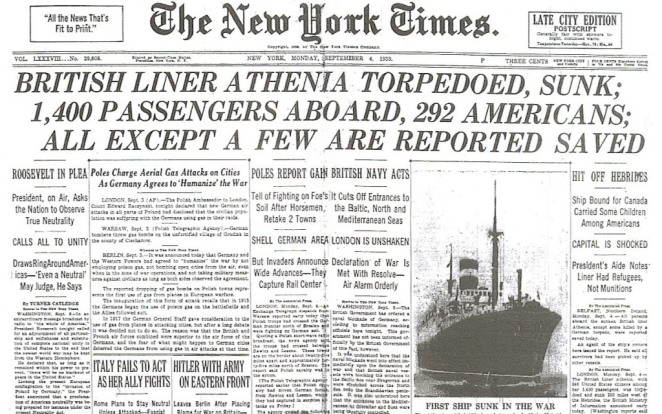 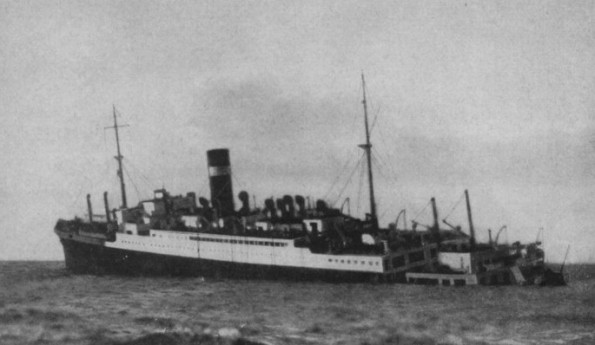 The full details of the event were not known until the Nuremberg trials were held in 1946.  Soon after the attack, Goebbels maintained that the British had sunk their own ship for propaganda purposes, hoping to gain support from German-neutral countries.

Testimony from Adolf Schmidt illustrates the veil of secrecy that was immediately put in place after the sinking.  Schmidt was a crew member on the U-30, and was severely injured several weeks later and stationed in Iceland during his recovery.

“Oberleutnant Lemp shortly before my disembarkation in Reykjavik, 19th September, 1939, visited me in the forenoon in the petty officers’ quarters where I was lying severely wounded. Oberleutnant Lemp then had the petty officers’ quarters cleared in order to be alone with me. Oberleutnant Lemp then showed me a declaration under oath according to which I had to bind myself to mention nothing concerning the incidents of 3rd September, 1939, on board the U-30. This declaration under oath had approximately the following wording: ‘I, the undersigned, swear hereby that I shall keep secret all happenings of 3rd September, 1939, on board the U-30, from either foe or friend, and that I shall erase from my memory all happenings of this day.’ I signed this declaration under oath, which was drawn up by the Commandant in his own handwriting, very illegibly with my left hand.

Later on in Iceland when I heard about the sinking of the Athenia, the idea came into my mind that the U-30 on the 3rd September, 1939, might have sunk the Athenia, especially since the Captain caused me to sign the above mentioned declaration.

Up to today I have never spoken to anyone concerning these events. Due to the termination of the war I consider myself freed from my oath.”

Never forget whether we are arm-chair genealogists, great-grandchildren, amateur historians or antique store-sifters, we often hold in our hands what may seem like insignificant snippets of the past.  Photographs and letters, mementoes and medallions…these artifacts, like six short words written in red ink on a ship’s manifest, all have human stories to tell.

The U.S. Navy Band Sea Chanters perform “Eternal Father, Strong to Save,” the Navy hymn, at the commemoration of the 59th anniversary of the Korean War armistice at Arlington National Cemetery in Arlington, Va. on July 27, 2012.

Johnmeyer, Hillard. “The Sinking Of The Athenia”. Something About Everything Military. Retrieved 13 August, 2014.

3 thoughts on “Posted at Sea – Tragedy Aboard the S. S. Athenia” 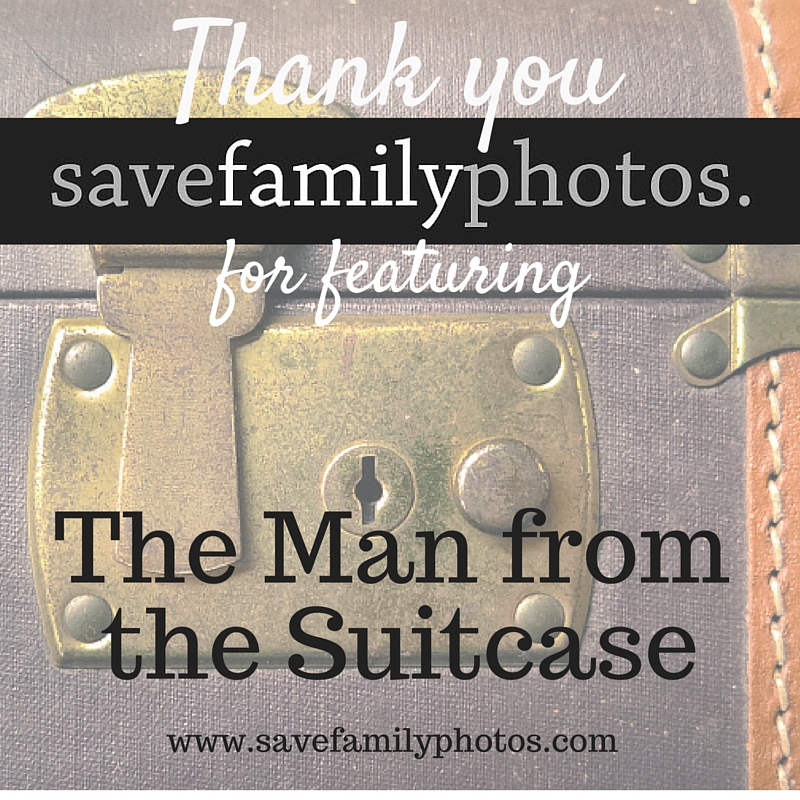